How Fibre Channel Standards Are Made, Part I: What Are Standards?

How Fibre Channel Standards Are Made, Part I: What Are Standards? 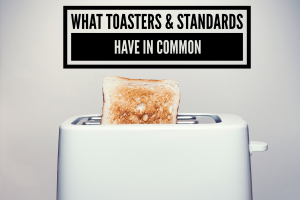 We rely on technical standards for all facets of daily life. It’s become really easy to take technology standards for granted, forgetting that they underpin the technology used in everyday activities. However, when things go wonky, it becomes glaringly apparent that there is a desperate need for things to work together, seamlessly.

Imagine, for instance, going into an electronics store and buying a new toaster, only to find out that the power cord contained 4 wires and  didn’t have a plug – because you needed to make your own power converter and plug to get it working in your house. And you were fairly certain that only 3 wires were used in your house power outlets. Or, imagine an even worse situation, where the type of toaster you bought depended upon whether or not the plug would work with the power supplied in your house in the first place, and there are thousands of different plug types! But which are a standard for the power in your house?

Data Center technologies fit into this category as well, and just like the proverbial toaster, having a standard way of connecting things makes technology less expensive and life a lot easier.

In this short blog series, we’re going to be pulling back the curtains on what makes something a standard, as opposed to just an agreement or a specification. We’ll also be looking at how T11 – the organization that creates the Fibre Channel standard – works its magic. Along the way, we’ll be casting light on some of the acronyms that may seem arcane, which should help you understand how better to use them when planning or architecting Fibre Channel solutions.

A Bit about U.S. Standards
Standards have become such an integral part of our existence that data center management requires little or no thought to everyday products and services and how they interoperate. But imagine our frustration if transceivers didn’t fit into switches, or if there were no common Fibre Channel connection speeds, or common connection protocols for servers and storage systems, or common methods to connect servers with storage systems. Without standards, many technologies flounder and fade away, so are not good investments.

Getting organized is a key first step for the unique Unites States standards system. Unlike most other nations, the United States does not have a single private sector organization or government agency that has overriding responsibility for standards. Yet we cannot have 500-or even 10-discordant voices espousing their own strategies and approaches.

Government’s role is to serve as a facilitator of private sector efforts to work together. Under the American National Standards Institute (ANSI) umbrella, U.S. industry, Standards Developing Organizations, and government must act collectively to shape the international standards framework and level the international playing field.

The U.S. standards system is unique in the world and has many valuable characteristics. Standards-setting is strictly a voluntary, private sector affair. Unlike many other nations where governments play a more active role and the process is more centralized, the U.S. federal government participates only as a stakeholder–as one of the many users of standards–and not as the driver of the process.

The U.S. system is tremendously diverse, consisting of about 600 organizations and consortia that develop standards. The result is a system that is partitioned largely into sectors such as information technology, telecommunications, automotive, medical devices, and building technology. When we look around, with a standards awareness, we can see standards in action everywhere, and especially in information technology.

This is a logical approach, because each sector knows best what standards it needs. Compared with the umbrella-type standards organizations that operate in other nations or at the international level, the more specialized U.S. standards-developing organizations also tend to be quicker to generate standards needed by industry. In an era of shrinking product development cycles, shorter standards development cycles can translate into a competitive advantage.

These standards-developing organizations operate according to the principles of balanced representation, consensus, due process, and transparency. The result is an open, competitive system that has produced standards that are widely recognized for their high-quality technical content.  Information technology standards developed by U.S.-based organizations are used in scores of nations and facilitate global and secure interoperability.

The International Organization for Standardization (ISO) defines a standard as a “document, established by consensus and approved by a recognized body that provides – for common and repeated use – rules, guidelines or characteristics for activities of their results, aimed at the achievement of the optimum degree of order in a given context.”

Standards can serve many purposes, including:

More information on standardization from ISO, IEC, NIST, and ANSI:

We’re going to look at the difference between what is a standard, and what is a specification.

After that, we’ll be taking a closer look at the Fibre Channel standards in particular, its governing body INCITS, and how different technologies are broken down into different groups.

Check out the rest of the blogs in this series