How Fibre Channel Standards Are Made, Part V: What’s with the Funky Acronyms?

How Fibre Channel Standards Are Made, Part V: What’s with the Funky Acronyms?

In this blog entry the references to the word funky are intended to imply something good in a quirky way. Because when we work with Fibre Channel, we find it to be a unique language filled with an abundance of acronyms that can be hard to translate.  Let’s start with Fibre Channel itself which is frequently written and referred to as “FC.” Fibre Channel acronyms are so pervasive that every standard, book, and presentation must start by explaining their meanings so as not to lose an audience.  As we learn the acronym-filled Fibre Channel language, we begin to notice a lexical rhythm which is funky in a good way and makes reading and listening to expert presentations about Fibre Channel understandable and enjoyable.

A simple example, my colleagues at the FCIA (yet another acronym for the Fibre Channel Industry Association, recently presented a live webcast called “Is FC-NVMe Ready for Prime Time?” which began with an explanation of FC-NVMe – an acronym for NVMe commands and data transported over Fibre Channel.  Since NVMe is an acronym for Non-Volatile Memory Express, this presentation was about two linked acronyms.  See how quickly this gets funky?  Another example is that the FC-PI-7 standard document begins by defining its’ name as Fibre Channel Physical Interface 7th generation, which many of us abbreviate to 64GFC, it then presents several pages of definitions, acronyms, and abbreviations.  Each standard in the INCITs T11 standards portfolio is required to contain a section on definitions, abbreviations, and acronyms.  A reader of FC standards must take time to understand the acronyms, abbreviations, and definitions.  For example, the FC-PI-7 acronym for pulse amplitude modulation, four levels, PAM4, is quite important to understand otherwise further reading of the standard is difficult.  Yes, Fibre Channel standards are written with a lot of funky acronyms.

Using acronyms enables Fibre Channel standards, specifications, books, presentations, emails, etc., to be written and presented using a lexicon specific to the FC SAN subject matter.  Notice I slipped in another funky acronym, FC SAN, which I assume you would not be reading this blog if you didn’t grok this funky acronym.  I have been in many conversations with those who do not grok Fibre Channel acronyms and the blank stares suggest they are thinking that Fibre Channel is funky in a bad way, with too many acronyms to decode.  This blog only scratches the surface of FC acronyms and is focused on the basic Fibre Channel acronyms.

With the above background, we focus on INCITS T11 which is the governing body for the development and maintenance of T11 standards.  T11 Fibre Channel Standards are logically and loosely organized into a five functional layered model, FC-0 to FC-4. The layers of the Fibre Channel model are referred to as levels in ANSI documentation. The Fibre Channel architecture is defined by a series of specifications published by T11 Task Groups for ANSI management.  Each FC standards document is required by INCITS and ANSI to contain a section which explains the acronyms and abbreviations referenced in the document and in other FC standards.

INCITS T11 provides ANSI with publication protocol standards and technical reports.  Each protocol standard describes a subset of the overall FC functionality.  For example, FC-SW, which is an acronym for Fibre Channel Switch Fabric, describes inter-switch protocols.  The latest version of these FC standards is recommended for new product implementations, however older versions are not obsolete, as backwards compatibility is facilitated and required.

The Fibre Channel architecture operates at the physical, data-link, and application layers. Understanding these basic funky FC acronyms for the Fibre Channel model is a start for expanding our understanding of the FC levels which build upon each other starting with FC-0 as the foundation.  One notable exception is the FC-3 level.  FC-3 builds upon the node-addressing functionality within FC-2.  However, link services defined by FC-3 are required for FC-2 operation.  Hence, FC-3 resides above and below FC-2.  Perhaps it is better to represent FC-2 and FC-3 as peers.  The FC level acronyms are defined using additional acronyms to make for a funky experience in understanding the FC language.

Another very common funky FC acronym Nx_Port, is an end point for Fibre Channel frame communication, having a distinct address identifier and Name_Identifier, providing an independent set of FC-2V functions to higher levels, and having the ability to act as an originator, a responder, or both.  Darn, another acronym for a level 2 virtual port, FC-2V.  This illustration is so full of funky FC acronyms that it requires at least 5 standards FC-PI (Fibre Channel Physical Interfaces), FC-FS, FC-SW, FC-LS, and FC-GS to explain their functions and interactions.

FC components include initiators, targets, and FC-capable switches that interconnect FC devices and may also interconnect FC devices with Fibre Channel over Ethernet (FCoE) devices. Initiators originate I/O commands through N_ports or A_ports. The A_port is a combination of one PA_Port (physical A-port) and one VA_Port (Virtual A_port) operating together. Targets receive I/O commands. The functional model defines communications between port types.   A Port has a physical structure as well as logical or virtual structure. This diagram shows how a virtual port may have multiple physical ports and vice versa. The F_port end is where an external N_port is attached to the fabric. It contains the physical and signaling interface (FC-PH) transport element.  The FC-PH acronym is outdated but is still found in the standards.  FC-PH was replaced by FC-FS in 1998 and includes layers FC-0 through FC-2 of the FC physical layers.  A deeper understanding of this diagram and acronyms is an exercise for the reader.  Hint, refer to the FC-FS-4 standard. 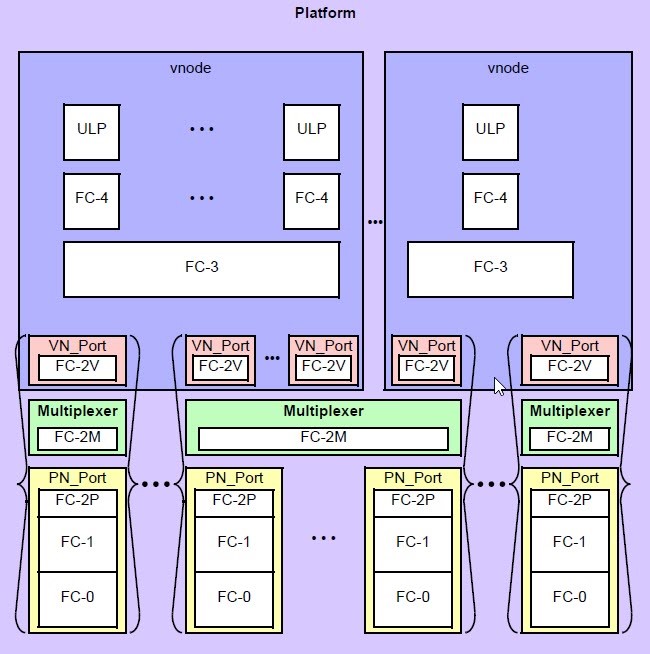 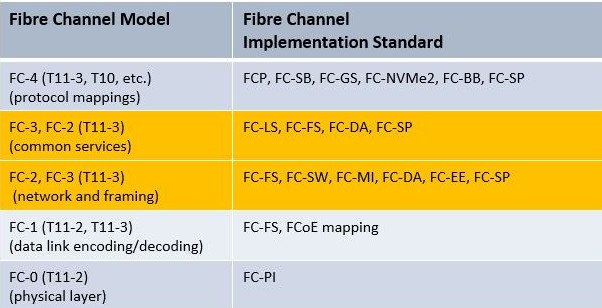 The protocol standards provide implementation requirements and options which are basically defined as SHALL and SHOULD functions. Protocol mappings enable FC to transport many types of traffic, for example SCSI3 and NVMe and also data associated with application-level services such as FC Name Services.  Most of these mappings are specified by T11 committees, but some are defined by other INCITS organizations, for example SCSI-3 mappings are defined by INCITS T10 committees.

Fibre Channel Protocol (FCP) is the SCSI interface protocol utilizing an underlying FC connection. Fibre Channel standards define a high-speed data transfer mechanism that can be used to connect workstations, mainframes, supercomputers, storage devices and displays. FCP addresses the need for very fast transfers of large volumes of information and could relieve system manufacturers from the burden of supporting the variety of channels and networks, as it provides one standard for networking, storage and data transfer.

FCP allows the mapping of upper-layer transport protocols, such as NVMe, Small Computer System Interface (SCSI) and IBM’s proprietary Fibre Connection (FICON), on top of it to enable the transfer of data and commands between a host computer and a peripheral target storage device or system.

In comparison to SCSI and FICON, NVMe has a streamlined register interface and command set, reduces the input/output (I/O) stack’s CPU overhead, lowers latency and improves performance. NVM Express Inc. developed NVMe for use with fast media, including solid-state drives (SSDs) and other memory-based technologies. By contrast, the SCSI command set was designed at a time when slower hard disk drives (HDDs) and tape were the primary storage media, and FICON was created to connect mainframe computer and storage devices.

FC-NVMe (which is NVMe over Fibre Channel) simplifies the NVMe command sets into basic FCP instructions. Because Fibre Channel is designed for storage traffic, functionality such as discovery, management and end-to-end qualification of equipment is built into the system.

A major distinction between NVMe-oF (NVMe over Fabrics) and FC-NVMe is that NVMe is the mechanism for transporting commands. NVMe maps requests and responses to shared memory in the host computer via the Peripheral Component Interconnect Express (PCIe) interface protocol. NVMe-oF uses a message-based model to send requests and responses between a host and a target storage device over a network.

NVMe over Fibre Channel is a solution that is defined by two T11 standards: NVMe-oF and FC-NVMe. NVMe-oF is a specification from the NVM Express organization that is transport agnostic, and FC-NVMe and FC-NVMe-2 are INCITS T11 standards. These two standards define how NVMe leverages FC. NVMe over FC was designed and specified to be backward compatible with the existing FC technology, supporting both the traditional SCSI protocol and the new NVMe protocol using the same hardware adapters, Fibre Channel switches, and Enterprise Flash Storage Arrays. There is no need to rip and replace the SAN infrastructure with NVMe over Fibre Channel.

A list of INCITS T11 standards, whose names utilize acronyms appended by revision, may now have more meaning, should you need to better understand how your Fibre Channel equipment operates and is managed.

There are many well know FC acronyms, such as WWN, F_port, FSPF, FLOGI, FEC, BB_credit and so on and on, but by now we understand that the key to understating FC is to understand the funky acronyms.  This list could go on for a long time, Techopedia’s Fibre Channel acronyms seem to never end.  As I mentioned, each standard has several pages devoted to defining and explaining the acronyms used in the body of the standard. As we get deeper into each standard we begin to notice the funky rhythm of the language and we become more conversant and aware of how this technology works.  I have been thinking of a Fibre Channel rap, but I’ll spare you the funky details. In the next blog entry, we will drill into some of the newer funky acronyms used to describe new and enhanced FC capabilities.

Let us remember that INCITS T11 Fibre Channel standards have been evolving over the last 20+ years through increases in speeds, number of links, new protocols, and new capabilities in storage networks and provide the basis for product conformance and interoperability.  The ability of Fibre Channel systems to interoperate because they conform to standards is really funky – in a good way!