An accurate roadmap provides a reliable guide for suppliers, manufacturers and distributors of products to plan their product development and release cycles. The features and timing of the technology migration reflected in the roadmap are based on open standards that are technically stable and complete. Some technology developments outlined in reliable roadmaps are required building blocks for product development. For example, lasers in optical modules need to be developed before transceiver modules used in a switch or host bus adapter. With a solid roadmap and standards, multiple companies can develop products in parallel that will eventually interoperate when they reach the market.

FCIA’s Roadmap Committee produces the FCIA Speedmap in concert with T11.2. The resulting roadmap is the refined product of an intense iterative process that pinpoints highly attractive market propositions balanced with sound engineering feasibility. It becomes the official FCIA Speedmap and MRDs (Marketing Requirement Documents) for T11.2’s map of speeds and timelines. The MRDs define sets of features and benefits that are not only feasible within the Speedmap timelines, but also result in actual products delivered in the prescribed timeframe that realize massive market success.

FCIA’s roadmap has helped the industry see the future of Fibre Channel for over 15 years. Fibre Channel has always had a clear road ahead where the link speeds double every 3-4 years when the speeds can be cost-effectively doubled. Figure 1 shows the history of Fibre Channel speeds and future speeds after 2020. 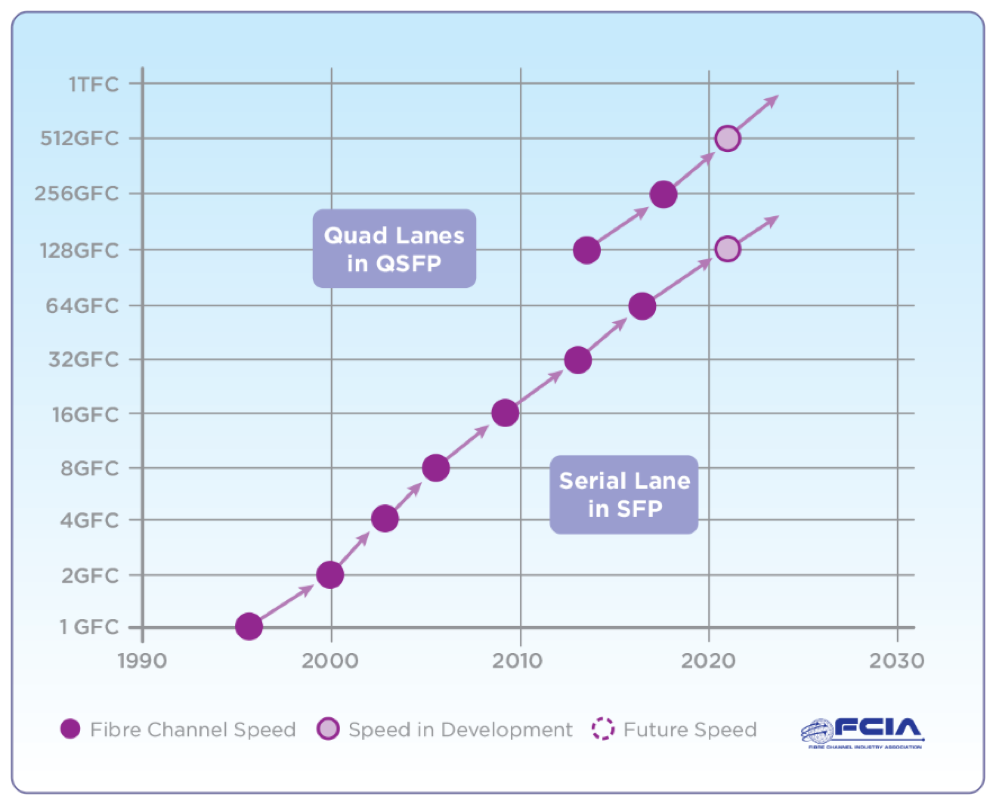 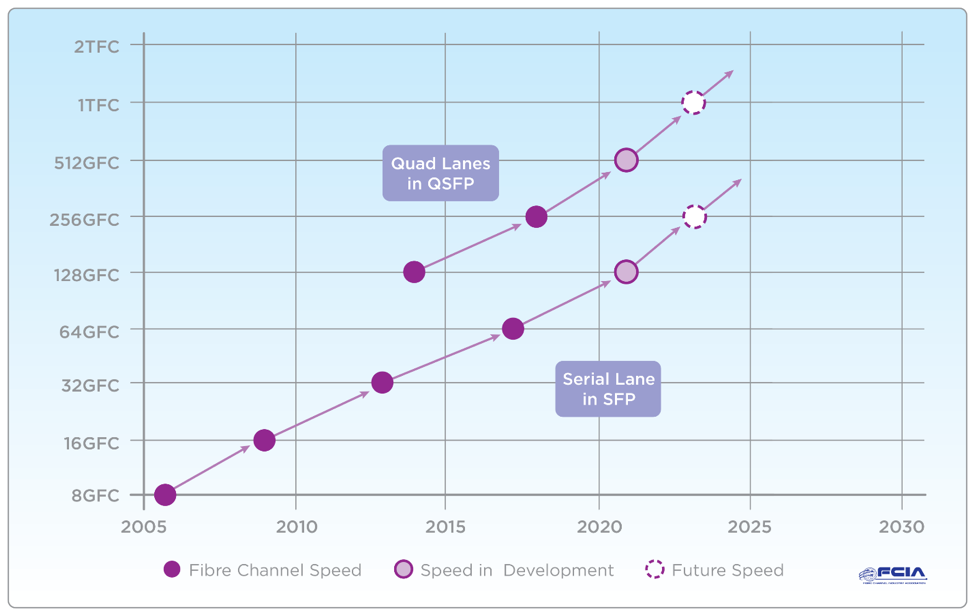 The physical layers of Fibre Channel and Ethernet are marching at a similar pace now. While Fibre Channel has continuously doubled speeds from generation to generation, Ethernet used to grow by a factor or 10 until 40GbE came along. 40GbE, which is based on 4 lanes of 10G technology, broke the 10X paradigm and opened the door to more moderate steps in speed. Similar to technology progressions like Moore’s Law and storage capacity, doubling of lane rates is the new norm. Individual lanes can then be grouped together to form new speeds. While Ethernet continues to use up to 16 lanes for 400GbE router applications, only 1X and 4X lanes are shown in the Fibre Channel Roadmap because these are the only relevant speeds for storage area networks (SANs).

The Fibre Channel Roadmap has been printed as a physical, folding roadmap and an electronic version can be downloaded at: https://fibrechannel.org/roadmap/. The backside of the map shows how Fibre Channel is used in data centers around to world to store and replicate data. Fibre Channel continues to grow and provide the most cost-effective and reliable links for SANs.

Besides the roadmap, the FCIA Roadmap subcommittee develops the MRD for new speeds like 128GFC. Important elements defined in the MRD include backward compatibility with previous speeds. For instance, just like 1/2/8/16GFC, and 32GFC edge connectivity, 64GFC and 128GFC are required to be backward compatible at least two generations. These speeds are auto-negotiated with no user intervention required, – i.e., 32GFC ports will automatically run at 8GFC and 16GFC, while 64GFC will automatically run at 32GFC and 16GFC. 128GFC continues Fibre Channel’s long history of ensuring total backward compatibility by also operating at 32GFC or 64GFC. This important level of backward compatibility has been and will continue to be a major benefit in Fibre Channel’s continued success.