The benefits of SANs are most apparent in real-world applications. Entry-level SANS typically result when a company moves directly attached SCSI storage to storage pools connected by Fibre Channel. When the basic Fibre Channel infrastructure is in place, the performance of the storage network increases while management costs decrease.

Entry-level Fibre Channel SAN solutions are suitable for workgroups, departments, and growing enterprises. Short distances and limited, bursty traffic are typical of these environments. These applications lean toward small fabrics for a cost-effective solution. Fibre Channel can dramatically increase the efficiency of these storage networks. Two fictional case studies will show the benefits of Fibre Channel in small storage networks.

Colorburst Graphics is a small pre-press firm that designs catalogs and advertising for retailers. Colorburst landed a new contract with a large department store chain, and three new employees needed to be hired. The new contract included designing monthly catalogs that would contain many graphics and, thus, gigabytes of data. Colorburst was worried because they were already struggling with their data network and the integrity of their data.

Figure7 shows Colorburst’s networks before the upgrade. In the “before” network, all data exchanges were handled over the LAN. When stock files of over 1 GB were transferred from RAID 1 to a graphic workstation, the transfer typically took 10 minutes on a good day and up to 30 minutes on a bad day. Co-workers were exasperated when multiple transfers were requested at the same time. The co-workers often found themselves chatting while they waited for their files to download. Since various files were accessed multiple times a day, the staff estimated that each graphic artist lost an hour of productivity a day. No tape backup procedure was in place, so files were often overwritten and no recovery was possible. 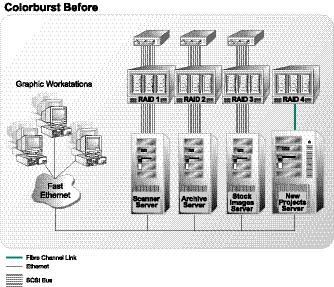 Figure 7: Colorburst’s computer systems had grown organically for a number of years. Four servers provided a centralized data repository for many graphic workstations. Their new Fibre Channel RAID increased their LAN bottleneck because they were backing up the RAID over Fast Ethernet. Because the LAN was tied up, they also had trouble printing and receiving e-mail.

Colorburst thought they were going to fix this data exchange problem when they bought RAID 4, which used the new Fibre Channel technology. Actually, their problems got worse, since they did not buy a Fibre Channel tape drive. The new RAID had to be backed up over the LAN which only compounded problems. Buying new hardware does not always fix the problem; a properly implemented solution usually requires management software as well. A total restructuring of their computer network was needed to overcome the shortcomings of their weak implementation. 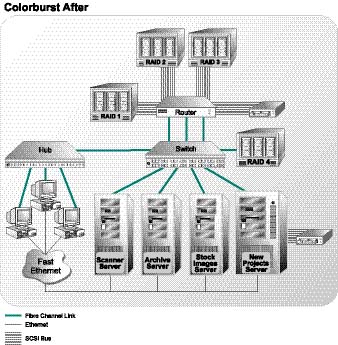 Figure 8: Colorburst’s new Fibre Channel SAN bypassed the LAN for large data transfers to the servers and workstations. Colorburst installed a router to utilize the SCSI-based RAIDs that were already being heavily utilized. A low-cost hub gave gigabit access to multiple graphic workstations. The entire network is much more manageable because the LAN was not being used for large file transfers.

Colorburst teamed up with a systems integrator to solve their data problems. The integrator quickly discovered that the bottleneck was the Fast Ethernet LAN. The overhead and interruptions inherent to Ethernet prevented high throughput. The integrator implemented a scalable SAN solution, as seen in Figure8. The SAN utilized a switch at the core of the SAN and a switching hub for workstation access.

Another key feature of the solution was custom file-sharing software to maintain data integrity across the Fibre Channel fabric. This software ensured data integrity by locking files that were in use. The team had previously lost considerable work when multiple people checked out an important file. Centralized management software was also installed that automated tape backup and allowed easy allocation of storage to individual projects. Colorburst found that they only needed to hire two new people when their productivity rose after implementing the SAN.

Savemor Corporation has over 500 employees and is growing at 25 employees per quarter. They’re jumping on the Internet bandwagon and plan to upgrade their servers and data center. Their current and future data storage needs are shown in Table 1. Their heterogeneous environment uses 2.5 terabytes (TB) of storage now, and they expect their storage to increase by an average of 50% per year as they bring on new applications.

* Part of current upgrade
** Next year’s upgradeTable 1: Savemor is a high-growth company that has requirements for over 3 TB of storage now and over 7 TB in 3 years. Savemor needs a highly scalable infrastructure that will meet the company’s needs over the next several years. 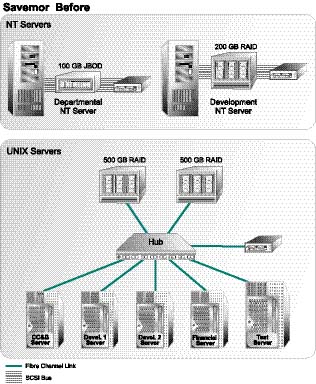 Figure 9: Savemor had a mixture of servers that utilized SCSI in their NT environments and arbitrated loop Fibre Channel in their UNIX environment. The backup procedure for the company was inconsistent between the UNIX and NT workstations because of different backup software. The growing storage demands at Savemor required a major upgrade to their data networks. 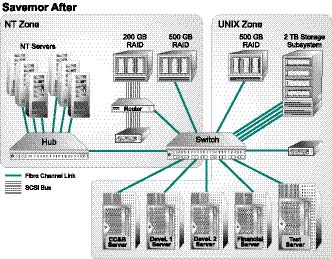 Figure 10: Savemor upgraded their network with a Fibre Channel switch at the heart of their SAN. Zoning was used so that both NT and UNIX data and servers could be attached to the same switch to minimize management requirements. They also utilized a router that kept their legacy equipment in the loop.

Savemor has a bright IT staff, and they already deployed a successful Fibre Channel hub-based SAN in their UNIX Environment, as shown in Figure9. The IT staff were inconsistently backing up the NT servers about every month. With new NT applications coming on-line with large data storage requirements, the group decided to install a Fibre Channel switch that would scale to meet future needs. The hub that was formerly used in the UNIX Fibre Channel SAN consolidated NT servers in the new fabric.

If growth rates increase, the fabric is easily scalable by adding additional switches to extend the fabric. The new implementation is already zoned to keep the NT traffic separate from the UNIX traffic. Eventually, these zones might be connected to individual switches since no data flows between the UNIX and NT servers. The important feature of the SAN is that it is scalable to meet the unforeseen needs of the future.

Entry-level SANs provide large benefits to users and IT staff. The first case study of Colorburst showed how a small graphics firm was overloading its LAN during file transfers. Several other applications that require large data files, such as video editing and FTP sites, would have similar storage network requirements.

This page is an archive of recent entries in the Blog category.