Storage Area Networking is a term used to describe one of the most popular uses of Fibre Channel. While the benefits of SAN have been long apparent, it was only with the advent of Fibre Channel that massive adoption of open SAN topology became feasible.

Fibre Channel SANs encompass the connection between storage and servers, as seen in Figure1. SANs service a limited number of servers that distribute data to a large number of users over an Internet Protocol (IP) network such as Ethernet. The close-knit Fibre Channel network, known as a fabric, is optimized for large data transfers with low overhead, low-latency switching, and minimal interruptions to the flow of data. A typical user would not have a direct connection to the SAN but would access the data stored in the SAN via a server on the IP network. Fibre Channel increases the performance of data transfers to levels that are unmatched by any other technology. 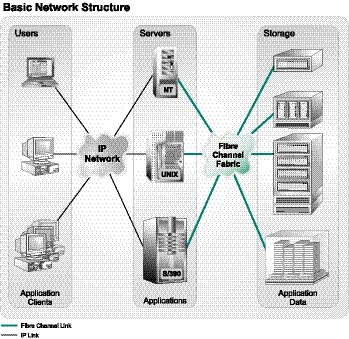 Figure2 shows how SANs allow multiple servers to access multiple storage devices while captive Small Computer Systems Interface (SCSI) storage can only be accessed by servers directly attached to the SCSI bus. Many supplemental advancements in storage management and security have been built on the Fibre Channel foundation to enhance the manageability and applicability of SANs. 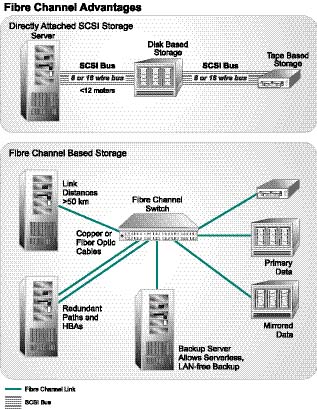 Storage Consolidation and Virtualization
With SANs. Data can be moved from one storage device to another to optimize configurations. Since Fibre Channel can have multiple initiators, multiple servers can access the same storage device. As Figure3 shows, reconfiguring data can free up entire storage devices for other applications. Storage in SANs is independent of servers, so it can be logically consolidated yet remain physically separated. 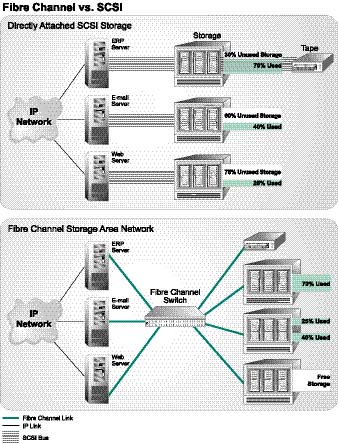 Figure 3: Traditional networks used captive SCSI storage for each server. As the number of applications and servers increases, the small problems of this architecture turn into big problems. Fibre Channel SANs offer a scalable solution where any server can access any storage device. The independence between servers and storage enables optimization of storage devices and increases performance over longer distances.

The availability of SCSI devices is limited because only one controller has serial access to devices. If a query to the third SCSI device occurs while data is written to the seventh device, the third device is denied use of the bus. Only one SCSI device on the SCSI bus is available at any one time. In a switched non-blocking Fibre Channel fabric, the use of one device will not affect the availability of other devices. 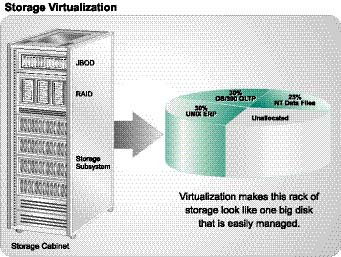 Figure 4: A SAN appliance virtualizes storage and has the effect of converting various storage devices into one big disk. This big virtual disk stores terabytes of data that can allocate storage to different applications quickly and painlessly. The management of many storage devices can also be controlled from one console.

Remote Mirroring
Disk mirroring is a simple concept, where data is written or mirrored to two or more storage devices when it is saved. When one disks fails, an identical copy still exists that can be readily accessed. Disk mirroring has been done for years with SCSI, but with SCSI’s distance limitation, the mirrored data usually remains in the same room as the primary copy. Fibre Channel has changed the paradigm under which mirroring operates.Now, whole storage subsystems and Redundant Arrays of Independent Disks (RAIDs) can be mirrored at remote sites. 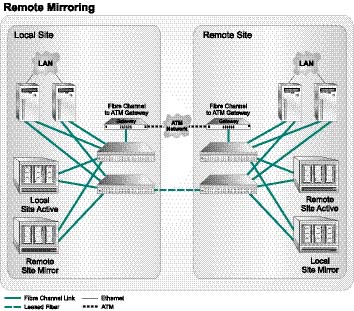 Although data loss due to disk drive failure is prevented by mirroring, mirroring is not a cure for the primary reason for data loss – user error. Tape backup is a very cost-effective way to prevent active sources of data loss, such as user error or viruses. Old techniques of backing up a server over the LAN required two dedicated servers, two SCSI buses, and most of the LAN’s bandwidth, as seen in Figure6. Backing up data when the application is not running, i.e., cold backup, limits the availability of data. Daily backup of gigabytes of data can cause significant downtime.

The bottom half of Figure 6 illustrates new techniques of tape backup based on SAN technology that avoid these pitfalls. Backup software runs on a backup server and automates backup procedures. After the tape and storage device are attached to the Fibre Channel fabric, a LAN-free backup, where no backup traffic travels on the LAN, is possible. Advanced applications and backup software based on Fibre Channel technology can do hot backups with no downtime. 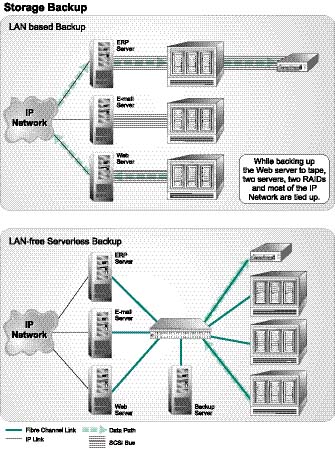